Arsenal belongs to all of us 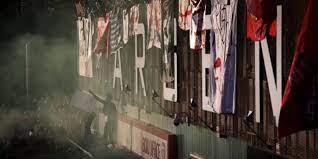 This week has been bruising for Arsenal FC. We’ve seen our name dragged through the mud, heard calls for the club to be kicked out of the Europa League semi-final and docked points in the Premier League.

And many of us would probably agree with that!

Arsenal fans are united as never before it seems in condemning the decision-makers who thought it was a good idea to align with a breakaway group of ‘super’ clubs in what appears to be a shameless grab for an even greater slice of the football pie.

AISA was forthright in telling the club that we utterly condemned Arsenal’s involvement in this scheme. We are pleased that the club caved in and withdrew. But lessons have to be learned from this debacle and change has to be made to prevent anything like this happening again.

We learned on Thursday that the decision to join in with the Super League scheme was made by the Arsenal board. We were told this at the Fans Forum directly by Josh Kroenke in response to a question from our vice chairman, Barry Dixey. Leaving aside the question of whether Arsenal led this move or simply followed, sheep like, behind the others, I have real problems with this.

The Arsenal board is made up of four men: Stan and Josh Kroenke (the owners at KSE), Tim Lewis (a leading lawyer representing KSE) and Lord Philip Harris of Peckham (wealthy businessman and peer of the realm). Both Lewis and Lord Harris are ‘lifelong Arsenal fans’, just like you and me (but perhaps without such deep pockets, in Lord Harris’ case at least).

The idea that decisions that affect a global community of Arsenal fans can be made without consulting them in any way is – in my opinion anyway – fundamentally wrong. This club has existed since 1886; it has been in and around its present site for over 100 years – it is a part of its community. You might be able to come in and buy a business but you don’t get to ignore its tradition and what it means to the people that have literally grown up with Arsenal as part of their lives, as I, and many of you, have.

So I get the calls for the Kroenke family to sell up and leave, I understand that sentiment. My worry is what happens next? Who is the next billionaire to buy my club, and how will they treat it?

So in the next weeks and months I want to see a proper discussion of how football clubs are run and I welcome Tracey Crouch’s review of governance that the Prime Minster announced this week. I’ve written to Ms. Crouch on behalf of AISA, because we have to be part of that discussion. All football fans need to be represented because so often we are simply sidestepped and ignored.

Money talks in this industry and that’s why the SL nearly took our game away from us.

The Arsenal board needs to hear directly from Arsenal fans via supporters groups like AISA and AST. It is not enough to ‘listen’ to us at forums like the one we had this week and which are a regular (and welcome part of the club’s communications). These can’t simply be PR exercises; we must be involved in decision-making where that is appropriate. We’ve seen how that goes when they ignore our advice on things like Silver Membership, and seemingly fail to appreciate our concerns about their proposed reward scheme.

I don’t want to pick the team, or tell Mikel Arteta or Edu who we should buy or sell: we would have far too many different opinions as fans!

But I do want a say in how my club, a club I’ve followed for over 50 years, conducts itself.

We turn up on Saturdays at 3 o’clock (and Sunday, Mondays, Tuesdays, Wednesdays, Thursdays, and Fridays…)

We shout and cheer and clap.

We buy the shirts and scarves (and caps, badges, beanies, mugs, hoodies, jigsaws… you get it).

We are The Arsenal, the fans.

We love the Arsenal, pretty much regardless of whether we win, draw or lose.

We deserve a voice, a seat at the table, we should be a trusted part of decision making. We need a new way of running football clubs like ours that takes account of this. Whether that is a German 50+1 model or something else, something new, needs to be up for discussion.

Josh Kroenke told AISA this week that it was up for consideration, it might be on the table; Vinai Venkatesham said he was sorry and said that he’d heard us. We want to help, we want to continue to act as a critical friend, not an enemy of the club we support.

They have our email and our phone numbers. We are ready.

If you want to know more about AISA or get involved in what we do join us!