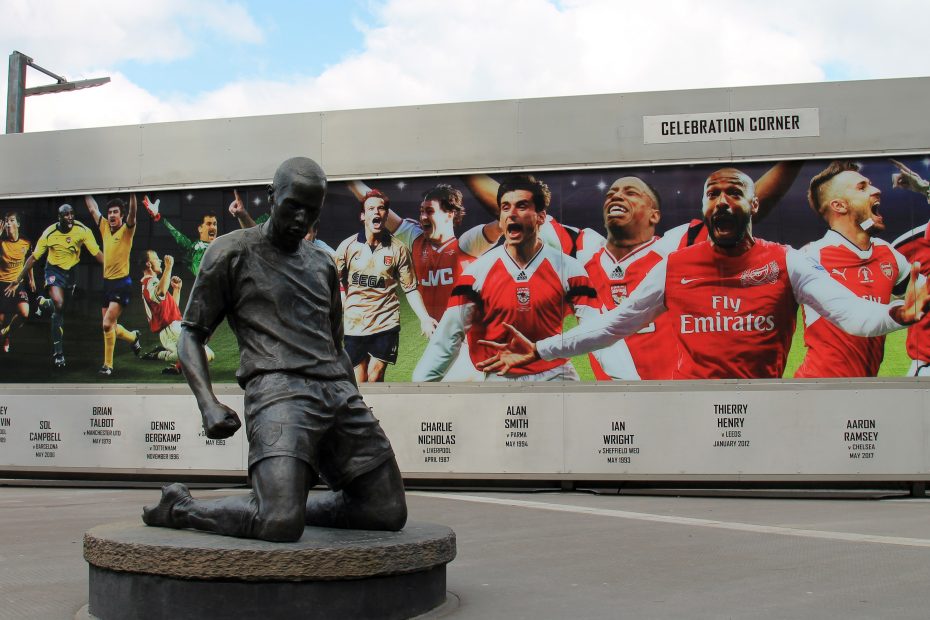 By Tony Attwood, chair of the society

Since then a number of achievements stand out.

First, and most publicly obvious, it was the History Society that suggested the erection of the statues around the Emirates Stadium.   The idea was put to the then Arsenal CEO Ivan Gazidis, at a meeting at Highbury House, studies were carried out by the club, and the plan went ahead, with eventually five statues erected.  You can read the story of the event here.

One of the five really resonates with me, because it was the one that we provided some details over, concerning its appearance.  This is the statue of Herbert Chapman, which we suggested should be looking up at the Emirates Stadium as if the old fellow is saying, “I did that.”  Thus reflecting his role in laying the foundations of the club.

The largest and most revolutionary of all the series is “Henry Norris at the Arsenal”– revolutionary because through the detailed research we undertook in relation to this topic, we have discovered some appalling false stories that have been written about the man who was Arsenal Chairman from 1910 to 1927, including allegations of bribery and corruption.

What was most interesting was that those who propagated these false stories in modern times were using just one source – the autobiography of Leslie Knighton, Arsenal’s manager from 1919 to 1925.

Knighton was by any measure, something of a failure, but he used his autobiography, written 20 years after he had been sacked by the club, and 10 years after Norris’ death, to exonerate himself and blacken the name of his boss.

So in our series we’ve put the record straight, and also endeavoured to restore the reputation of Norris – the man who rescued Arsenal from bankruptcy in 1910 (when no one else wanted to take on the task), moved the club to north London, and made it profitable.

Norris was also, in his day, a great hero of the country for his work in the first world war, and for this he was rewarded with a knighthood, and raised from being a civilian volunteer at the start of the war, to the rank of Lt Colonel by its conclusion.

Another, very different type of research, began as the simple idea of finding, in the history of the club, an interesting anniversary for each day of the year.   Thus we might say that on a certain day, Arsenal won the league, on this day we signed this player, and so on.

The target really was to locate one interesting event per day.  However we quickly found that far from being short of events to provide one a day, we had far more events of note that we imagined would be worthy of recording.

And so were born the anniversary files, a still growing list of dates that should be commemorated, or at least remembered, in the history of the club.  At the last count we had well over 5,000 events in the history of Arsenal noted, each with a few lines of explanation as to why they are important, and in over half the cases a link to a more detailed article on the event.

All the anniversaries can be found on our website – if you would like to look up any particular date go onto the Arsenal History Society website and look at the right column under the heading “Pages”.  There you will find each month has its own page where all the anniversaries are noted. At the moment we are also publishing the day’s anniversaries with an additional commentary as an article in the blog.

But of course the anniversary files and the history of Henry Norris are just two of the features we have worked on.   You will find others listed on the site through the link above but here I’d like to highlight just a few more that I’m rather pleased about.

Arsenal in the 30s was an important story to write, because it records in detail the club’s first successes in the era of Chapman and Allison. Our series looks at each and every match, and the transfers, the transfers, the tactics and the league position of the club week by week as it moved towards its first trophies and on through its most triumphant decade.

A similar series was written in relation to Arsenal in the 1970s, recording not just the extraordinary triumph of the first double, but also the surprising decline of the club thereafter.  And as ever we look not just for the facts, but the explanations behind the facts.

And that is only the start of what the Society has done.  If you want to see more of the series we have written, they are detailed on the website’s home page.

Yet that is not all, for over the years we have also moved into publishing, and I’ll cover that in the next article.