What did we make of David Dein’s book? We review it . . . and hear what David has to say about his life. 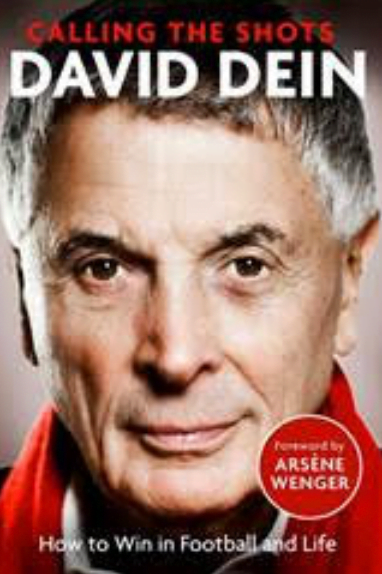 David Dein spoke to AISA about his new book, ‘Calling the Shots. Hear the podcast of the event here.

AISA”s Tony Attwood has read the book. Here’s what he thinks.

The Overthrow of Those Who Do

In many regards, David Dein is superman without the power of flight but with boundless energy.  And I say that because for most people, rescuing Arsenal from the doldrums and then working with Arsene Wenger to give us the Invincibles is probably enough for anyone’s lifetime.

For then, having been forced out of the club when the ownership changed, he could have sat back with his millions and watched the world go by.   But no, he set up the Twinning Project linking football clubs and HM Prisons – which to me seems to be the most incredible and important prison project of the last half-century.

And reading in ‘Calling the Shots’ about the way he was cast aside by Arsenal when the Kroenke regime marched in, and how all his drive, his energy and his address book (which must be the size of Encyclopaedia Britannica) were lost to the club, I was reminded of one the other great administrative reformer at Arsenal who was also thoughtlessly cast aside in a takeover: Lt Col Sir Henry Norris.

I suspect Mr Dein, like most others, knows little of the man who rescued Arsenal from insolvency, moved them to Highbury, guaranteed the payments to build the new stadium, (transforming the land from a garden into a 1st Division football ground in 10 weeks), but the parallels are there.  Norris rescued Arsenal from financial ruin and brought in Chapman.  Dein took a middle-of-the-road 1st Division club, ushered in the Premier League and gave us  Mr Wenger.  And the reward each got was to be unceremoniously kicked out.

However, there’s a difference.  For Norris, a man who was key to the Kingdom’s victory in the first world war, being removed from Arsenal was the end; thereafter he lived peacefully with his family in France.  For Dein however, his removal from Arsenal was the stimulus to do something new.  And what a something that turned out to be.  And indeed, if you pick up this book I would beg you to read it to the very end so you get the full details of Mr Dein’s current venture: the Twinning Project.  I’ll come back to it in a short while, but if you want to skip something in the book, whatever you do, don’t skip the ending.

And yet, and yet….  There is a moment about two-thirds of the way through “Calling the shots” in which David Dein describes how he is working on the FA bid campaign to get the World Cup 2018 played in England and how open members of the Fifa committee were in demanding bribes, which is disturbing. For in the course of the chapter Jack Warner is described as a “likeable rogue” – which is pushing it a bit given that CONCACAF ultimately got a court order against Warner ordering him to repay $79 million that he had fraudulently obtained from the Federation.

Then there’s a meal which cost £35,000 (“a bit steep”), and the FA providing the funding for a £1.2m sports complex in order to secure another vote for their bid to host the World Cup. Somehow it is all just accepted as the way it goes…  Maybe it does, but it shouldn’t.

Indeed, there’s no hiding from the fact that the England bidding team of which Dein was a part must have known how utterly and totally corrupt Fifa was, and yet they kept on going, spending the money, making the bid…

Then when they find out that two days before the vote the BBC are going to expose Fifa’s rampant corruption in a Panorama programme, there is a serious attempt to get the programme held back so that people wouldn’t know how utterly awful Fifa actually is.

Sadly, the moral issue of what to do when one is dealing with an organisation that is utterly corrupt in every regard is never really considered, and the fact that England got just two votes in its bid to hold the World Cup having spent £21m of taxpayers’ money on the bid is just left there.  It does not make good reading.

And yet from the off, Dein comes across as an incredibly honest man, in the know, full of integrity, one of the group that got the Premier League off the ground in the face of Football League opposition, the man who worked closely alongside Wenger and the Invincibles.  The man who is straight, and who gets things done.

It is a strange contradiction, made even stranger by the final chapters of the book in which Dein describes in superb detail the incredible job he has done setting up the Twinning Project which brings together professional football clubs, prisoners and university research teams.  And like the Premier League, it works.  Indeed, since its inception, referees have also joined, delivering courses in prisons.   (Indeed, if even the PGMO are seriously involved in this I will have to revise my thoughts on that organisation).

Arsenal now have links with Pentonville and Downview women’s prison and the UN have picked up on the idea, and it is starting to travel to other countries. Believe me, if it is delivering five percent of what Dein suggests (and I am certain it is doing far more) it is probably the most powerful reform initiative ever instituted within centres of incarceration.

And yet amidst all this honourable, selfless, devoted and stunningly effective work, Dein appears, by his own account, to have also been the man who has gone into the FA bid to host the world cup in the belief that all was fair and above board – even when he saw the corruption going on in front of him.

Thus at one point, the author says, “I could never understand why Michel Platini for France voted in favour of Qatar.” Yet we know Mr Dein is a multi-linguist.  He can read all those European papers that write about Fifa and Uefa on a regular basis.  I mean, readers of my blog know why.  Surely, Mr Dein must have known.

Just as he must know about Infantino and his attempt to corrupt the entire Swiss legal system through illicit private meetings with Mikel Lauber – Switzerland’s most powerful law enforcement and investigatory official.

And yet, it seems, here is a man who has instituted probably the most significant project in terms of prison reform since the Criminal Justice Act of 1948, who was at the heart of the creation of the Premier League and central to the management of Arsenal during the evolution and ultimate triumph of the Invincibles, and who doesn’t see just how much is wrong with Uefa, Fifa and the like.

But to come back to the Twinning Project between clubs and prisons: if that was all that Dein had done it would be more than worthy of a statue in central London, but there he was, a key player from the creation of the Premier League through to bringing Arsene Wenger to Arsenal. Not to mention projects from running the Theatre Investment Fund to introducing VAR into football…

We don’t get too much criticism in the book, although the author is critical of Ivan Gazidis (“Ivan’s way of developing the club was to hire more and more people”), and I find that somewhat strange, thinking back to the time I went into a meeting with Gazidis along with two other members of the AISA committee.  Gazidis explained that he was trying to find ways of making the recently opened new stadium more identifiably Arsenal, and I pitched the idea of the statues.   I was not one of the 650 staff Dein says Gazidis had on the books, but Gazidis listened, was courteous throughout, and made the idea happen even down to following the detail of how the Chapman statue should appear (“as if looking up at the ground and saying ‘I did that’,” as I suggested).

Yes Dein was there at the heart of the second great coming of Arsenal 1996 to 2007 (the first being of course in the 1930s), and of course, all I did was sit in the stands, and write about it.   Dein reveals his close liaison with PSG, whose owner also runs beIN Sports, and Qatar Sports Investments, and is a member of the organizing committee of the Fifa Club World Cup, and chair of the European Club Association.  That’s a lot of power in one man’s hands, and that worries me, but not Mr Dein.  And he knows these people, so who am I to contradict?

And this is the point.  Dein has spent much of his life on the inside of football; I’m just a fan peeking in and offering the odd idea when I get the chance.  Dein’s role in bringing Mr Wenger to the club should never be overlooked, and his work with prison inmates is astonishing.  For each of those even a statue doesn’t seem enough!

Maybe I misjudge him over the issue of Fifa – indeed maybe I misjudge Fifa.  But really that’s not the point. David Dein was instrumental in the rebirth of Arsenal, and his prison project is revolutionary, stunning and brilliant.  Each is more than enough for a lifetime. Indeed if I ever get to do one-hundredth of what he’s done, I’ll rest easy when my time comes.

Read the book.  It is most certainly worth it.

You can buy it in bookshops or online, hardback or ebook. Proceeds are going to the Twinning Project.