Was Arsenal’s manager a dope? 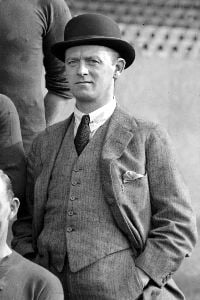 In the Arsenal History Programme for last season’s home match against AFC Bournemouth we led with a story entitled “Leslie Knighton – Arsenal hero or villain?”. Having managed both clubs it was an appropriate time to take a look at the record of the man who was manager at Arsenal from 1919-1925 and Bournemouth from 1925-28.

Knighton’s first managerial post was at non-league Castleford Town, he then progressed to become assistant manager at Huddersfield, then in Division Two, and subsequently took on the same role at Manchester City of Division 1.

He had a good reputation through these years, was particularly popular at City, and was appointed by Henry Norris as Arsenal manager in 1919, prior to Arsenal’s return to the First Division.

Finishing 10th and 9th in the first two years maintained his standing but from then on it was largely downhill. In 1921/22 Arsenal dropped to 17th and although they recovered to 11th the following year, his last two seasons were pretty disastrous with 19th and 20th place finishes, hence his dismissal and the appointment of Herbert Chapman.

Whilst researching the Arsenal History Programme article I came across an interesting interview with Knighton by the ‘Football and Sports Favourite’ magazine, published in May 1921. It was generally a favourable piece, certainly reflecting the view that Knighton had done reasonably well and commenting on his strong scouting network, something he had been noted for at his previous clubs.

However, the journalist also reported that Knighton was evasive when questioned about whether he had sole control over the team selection, saying ambiguously “Different clubs have different methods”.

When pressed further Knighton made the observation that

“There is a time to be silent and a time to talk”.

The implication is pretty clear and given this was at a time of relative success, and general optimism about the future at Arsenal, there was no reason for him to want to allocate blame on to anyone else.

The FA Cup was of at least equal stature to the League at this time (many would argue it was English football’s primary competition) and so Knighton’s reputation was certainly not enhanced by the fact that during his six years in post Arsenal only had one decent run in the Cup, when they reached the quarter final in 1922.

Knighton’s final FA Cup tie ended in defeat to West Ham, after a second replay. The first match against the Hammers, at the Boleyn Ground on January 14 1925, led to a notorious story when. over 20 years later, Knighton wrote in his autobiography that prior to the game he instructed the players to take some “little silver pills” provided by an unnamed Harley Street doctor. Knighton claimed that the pills were successful in substantially increasing the players energy levels but that a side effect was that they all had a raging thirst afterwards. Consequently the players refused to take them ever again.

If we believe this, it would have been one of the first recorded stories of doping in football, albeit entirely legal at the time. Tony Attwood wrote about this in an AISA booklet several years ago and also in a piece he penned for the AISA website, and the story was briefly mentioned in the programme published by AISA for the recent ‘100 years’ celebration event (pictured, right).

The account about the pills seems previously to have been accepted as accurate and it doesn’t exactly paint Knighton in a positive light. Now, however, Tony has written that he believes this story should be dismissed as a figment of Knighton’s imagination, written entirely with the objective of selling copies of his book.

I’ve looked at the ‘evidence’ that Tony presents to justify his change of heart and it doesn’t really stand up. As Tony has said, it’s difficult to find any significant proof, one way or the other, to reach a definite conclusion.

As for the “hero or villain” question, well that was a bit rhetorical, I’m not sure there’s anyone connected with Arsenal who regards Knighton as a hero. His autobiography doesn’t totally read as an honest and objective account to me and there seems to be some bitterness towards AFC and particularly Henry Norris. The claims made by the publisher when the book first appeared are way over the top and I can certainly believe that some of the stories included are exaggerated or inaccurate and another reason for this may well have been to maximise book sales for his retirement fund.

Knighton’s achievements between 1919-1925 were not substantial but being Arsenal’s manager at that time was not the easiest job in the world, it being a period where the club were seeking to clear off their substantial debts. After Bournemouth Knighton was manager at Birmingham City and of Chelsea, and then post war at Shrewsbury Town for a couple of years.

An objective reflection of his football career would be that he was a middle-ranking manager with some strengths as well as many weaknesses. Not a hero or a villain.

Copies of the ‘100 years’ programme can be obtained by sending a donation (£5 minimum plus £1 p+p). Your cheque should be made payable to the Willow Foundation and sent to 11 Tannington Terrace, London N5 1LE. Or alternatively by PayPal to [email protected] from where it will be forwarded on to the Willow Foundation, the wonderful charity set up 20 years ago by Bob and Megs Wilson.