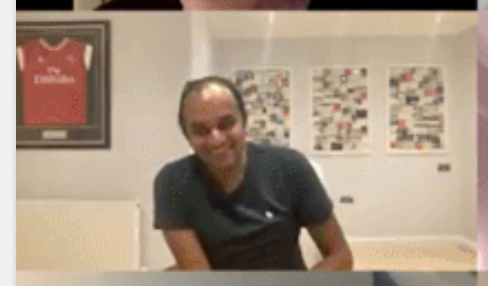 At the recent Fans’ Forum, Arsenal Chief Executive, Vinai Venkatesham, gave a report on the last few months. Here it is in full.

(For the other Forum items, AISA members should log into the Members Only page. If you don’t know how to do that, contact us on [email protected].)

Vinai opened by explaining that looking at the end of last season we are not where we want to be on the pitch and to get back to where we want to be will not be a quick fix. He outlined our approach to the summer transfer window saying it was focussed on youth.

The aim was to fill our squad with some of Europe’s most exciting young talent and supplement them with players from our Academy and our more experienced players. He said we signed 620 players aged 21-23 who have experience and character.

For example, Lokonga captain of Anderlecht, Odegaard captain of Norway, Tomiyasu 24 caps for Japan, Ramsdale played huge amount of football for an U23 goalkeeper. Tavares and White also join with plenty of experience. In addition, he said we have renewed Kieran Tierney and Emile Smith Rowe on long term contracts.

Vinai explained the window was tricky post-Covid with sales particularly difficult. Joe Willock has joined Newcastle, and there have been loans for William Saliba, Hector Bellerin, Reiss Nelson, Alex Runnarsson and Lucas Torriera; as well as loans with obligations to buy for Matteo Guendouzi and Dinos Mavropanos. We also mutually agreed a contract termination with Willian who returns home to Brazil.

He said that in terms of finances – with the backdrop of significant lost revenues through Covid, and a challenging transfer market, what we did in the window only possible with direct financial support from our owners.

Turning to the start of the season, Vinai said it had been a very difficult start, compounded by Covid issues in the build-up to the opening game against Brentford. He is proud of how the team and staff stuck together in that period and came out fighting after the international break.

In addition, the support from our fans has been outstanding. He said the attendance at the Carabao Cup against Wimbledon with over 56,000 tickets sold was astonishing. This was capped off by the atmosphere against Spurs which he felt was as good as it has ever been.

Vinai moved on to talk about the fantastic start to the season by our women’s team under new head coach Jonas Eidevall. Significant investment has been made on the pitch, with signings of Tobin Heath, Nikita Parris, Mana Iwabuchi and more, and off the pitch with Gary Lewin returning and further investments in support staff and facilities. He explained we were looking to hold more women’s matches at Emirates Stadium.

He said the Academy continues to flourish with new U23 coach Kevin Betsy settling in well and there have been strong performances across the age groups.

Off the pitch, Vinai said things have settled down post the ESL debacle. Premier League meetings are back in person. He’s seen suggestions that there had been discussions on moving PL games abroad. There have been no such discussions in PL meetings although work was underway to look at the possibility of more games in pre-season under the PL banner. He assured the forum that should suggestions of PL games abroad ever come forward, they would be raised with fans.

He explained that the club is back in the European Clubs Association (ECA). He is on the ECA Board and JV Board of UCC SA, the JV which manages commercial rights to UEFA Competitions. This is further evidence of how respected Arsenal is in European Football and comes at an important time with debates around future financial fair play rules and the international match calendar post-2024.

Covid remains a challenge, he said, with restrictions at the training ground and matchdays for players and staff. All our sites are open but we continue to monitor the government’s Plan B around matchdays if C19 gets worse.

Vinai also explained how we are supporting local businesses impacted by C19. We have an ongoing programme which includes a 30-second social ad with player, LED and a programme advert. The first two businesses were the Tollington with Rob Holding and Autoparts with Auba. More are planned.

On the Super League Vinai explained our position is unchanged. We are withdrawing and are working through the complicated legal process.

On COVID vaccinations, Vinai said that the vast majority are vaccinated and we are encouraging all players to be vaccinated. However, as an employer, we can’t force them to have it.