The Arsenal clock and the Clock End 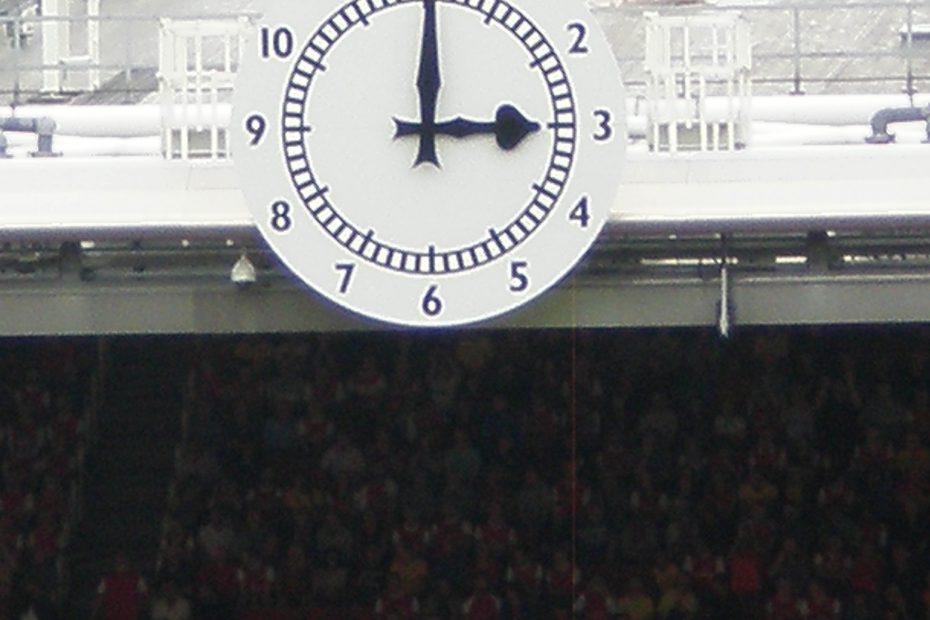 From Tony Attwood whose history page is https://blog.woolwicharsenal.co.uk/history-news

10 September 1930: The Daily Mirror published its picture of the clock with a 45 minute face was installed at the Laundry End of Highbury, a picture which thus help Arsenal History Society correct an error in the long-told but erroneous story about the origins of the Arsenal clock.

27 July 2006: The Highbury clock was erected onto the wall of the Emirates Stadium.  The new clock inside the ground, based on the design of the original clock of Highbury was unveiled in 2010.

The original big clock at Highbury was placed at the rear of the then uncovered Laundry End of the ground (which later became the North Bank), between the 7th and 9th September thus being ready for the home game on 10 September 1930.

The exact date of the work is not known – the source of our information (which is different from that which has been published by Arsenal) is a picture in the Daily Mirror in its paper on that day – in its preview of the match against Blackburn.

The picture shows a clock with a 45 minute face.   Other sources state that the end of each half would be announced by a klaxon and that the clock measured 8 feet 6 inches across.

Thus fans who did not carry their own wrist watches (the majority of people at that time) were shown how much time there was in each half.   (There being no substitutes, and fewer visits from medical staff, interruptions were fewer, and so halves really did last 45 minutes).

However the Football Association felt that this ticking of 45 minutes would provide far too much information to the fans, would distract them from the game and undermine the credibility of the match officials.   Thus it was that they ordered the club to remove the offending instrument of time.

Arsenal naturally had to obey the instruction but rather than remove the timepiece totally (which the FA had clearly intended in their instruction, but didn’t actually say) Arsenal simply changed the clock so that the clock face showed the normal time of day which of course was enough to tell supporters how much time was left.

The FA gave up at this point and took no more action and the clock remained at the rear of the terracing until 1935 when it was decided to cover part of the Laundry End.   With the College End of the ground remaining uncovered, the clock was placed at that end, and this quickly became known as the Clock End.