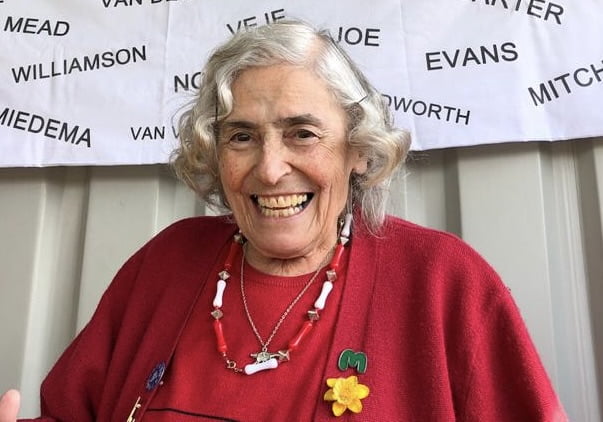 AISA was greatly saddened by the news that Maria Petri has died. She was one of our first members some twenty years back and she was as loyal to us as she was to the club.

Showing how much she has meant to the club over many years of supporting both men’s and women’s teams and at all levels, the team played with black armbands against Chelsea in the USA yesterday. David Hillier, in the commentary to that match, said how important she was to him when he began as a youth player at the club, adding how much she loved football, but especially loved the red shirt.

She will be sorely missed. One of the things we’ve heard said many times in the last few hours is that going to matches will never be the same again.

We publish some of the many tributes that have come to our attention.

It was with great sadness that the club has heard of the passing of legendary supporter Maria Petri.

It’s very difficult to put into words what Maria meant to everyone involved at Arsenal Football Club: players, staff and fellow supporters. Rarely can it be said that ‘games just won’t be the same’ without a supporter, but Maria’s presence, her legendary ‘Come on You Gunners!’ and many, many supportive songs created over the decades, will truly leave a void on matchdays at Emirates Stadium, Meadow Park and at away matches wherever we are playing.

Maria began following Arsenal in 1950, aged just 12 and remained a staunch supporter for the rest of her life. She was a regular presence at men’s first-team, reserve and youth team matches and when Arsenal Ladies were formed in 1987, she took them to her heart and became synonymous with the team based at Boreham Wood.

There are so many Maria memories down the years: celebrating cup finals with the Women’s team, being visited by Ray Parlour with the FA Cup during the pandemic, singing her Beth Mead song with ‘Meado’ herself… but whoever she was with, whichever Arsenal team she was supporting, every picture of Maria was always lit up by her wonderful smile – and the smiles of everyone around her, energised by her infectious positivity and the twinkle in her eye.

The former schoolteacher was determined to be an upbeat, vocal presence at games amidst occasional negativity as a female fan in her earlier days as a supporter. But she was unflinchingly positive, no matter what the circumstances of the game and we hope that as a tribute to Maria, supporters will be spurred on to harness her optimism and spirit in memory of this very special fan.

Speaking from our training camp in America on Friday, Mikel Arteta said: “We are all really sorry to hear the news. She was an integral part of our support and our community. The way she transmitted Arsenal values and the feeling of this football club was something I have never seen before. She was everywhere, every single week and she will be missed. Big time.”

Maria often said that “Arsenal was her family” and that family is devastated today. She also said: “I shall be oh so upset when I die, I won’t be able to watch Arsenal anymore.”

Well, everyone at Arsenal Football Club can’t quite believe that you won’t be able to give your very special support to our club anymore. You’ve been one in a million and we’ll never forget you Maria.

Ian Wright first reacted to the sad news on the social media platform by uploading an image of himself and Maria at a game with a series of crying face and broken heart emojis before commenting on a photo taken in 2020 with a simple four-word message: “Maria Home & Away”.

Rob Holding, currently on the US pre-season tour, reflected on Instagram and said: “A sad day for the club, an Arsenal legend!” the defender wrote. “Every game, under 23’s, womens and mens you could hear her voice. Will be missed, Rest in Peace Maria.”

And the tributes haven’t stopped there. In one tweet, former striker Alan Smith summed up exactly what Maria meant to Arsenal football club: “To me and my teammates, Maria was simply a part of Arsenal, someone always there with that familiar cry,” he wrote. “So sorry to hear the news.”

In addition, Katie McCabe echoed that sentiment. “Maria you were our biggest supporter, with the best songs and had the most infectious smile,” she wrote on Twitter. “A true gooner through and through. We love Maria we do oh Maria we love you.”

It’s not just current and former Arsenal players who have paid tribute to Maria, as fellow supporters, including celebrity fan Piers Morgan, have also shared their condolences.