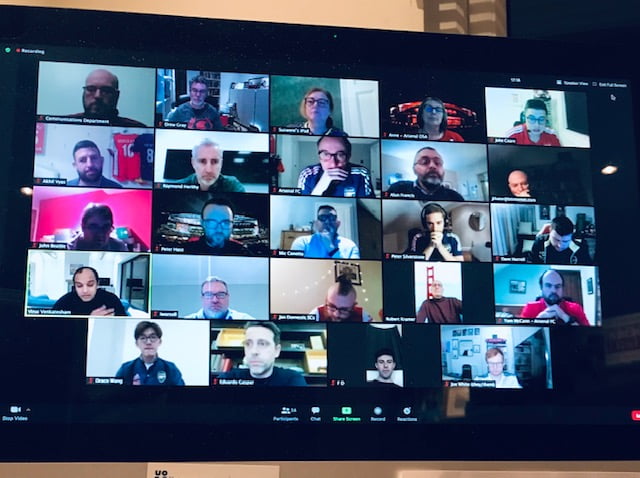 On Tuesday evening I attended the regular Arsenal Fans’ Forum on behalf of our members.

As has become the new ‘normal’ this was convened on Zoom rather than in the boardroom at Highbury House. In a way this is a great leveler because instead of the ‘boardroom hierarchies’ of ‘head of the table’ everyone is in their own equal space (with their own carefully chosen backdrop).

Some had the ubiquitous bookshelves, others Arsenal themed backgrounds or paraphernalia, and one had the Golden Gate Bridge (I didn’t ask why). In another sign of how relaxed this was Vinai Ventkatesham, Arsenal FC’s CEO, apologized in advance if he had to ‘pop out’ for a few minutes but Father Christmas was due at the door for a visit to his children (make up your jokes about how he might ask him for a new creative midfielder in his stocking!).

Also in the room was Edu and he was there to take questions from the forum, which I thought was pretty brave given the current state of things. VInai offered us a short update on things – a disrupted and difficult transfer window where, nevertheless, we did some good business. Selling was always going to be a challenge, but we made ‘some good investments’ in the squad.

The decision to leave out ‘Papa’ (Sokratis) and Mesut Özil was based on ‘purely sporting criteria’ he declared, and was Arteta’s decision and that of the coaching staff. Everyone is disappointed with the results so far but ‘everyone is sticking together’, and is behind Mikel. Keep calm and carry on folks, things can only better.

Edu’s message was the same and while he apologized a number of times for his command of English it is pretty clear that he can make himself understood. His English is excellent, much better than my Portuguese.

He took questions and assured us that while he was ‘not comfortable’ with the position the club is in the league he was seeing good things on the training ground and refuted any talk of a split between manager and players, or even certain players.

He accepted that rumors exist but argued that this is inevitable; players are always; likely to be unhappy from time to time (perhaps they don’t get played as much as they’d like, etc), but there is nothing to see here folks. That was his message.

He was asked about young players, specifically about Saliba. On the young defender he agreed that he was a ‘good player’ but he came back from his season long loan with issues – the legacy of a bad injury and some personal family problems in France. He has taken a while to  adjust and we have players in front of him (Holding, Gabriel, presumably Luiz as well) so a loan at January seems inevitable.

But Mikel is giving youth its chance and Edu was at pains to praise the young players, listing them all (starting with Saka). They are the future and he believes that future is a bright one. We have a plan and ‘we all want to succeed’.

So, keep calm and carry on trusting the process.

Vinai spoke of his pride in the fact that Arsenal had delivered over 500,000 meals to local residents this summer and that the Arsenal Foundation was continuing to do excellent charity work in the UK and abroad. Mark Gonnella (the club’s Communications Director and chair of the forum) outlined a new scheme that supporters can get involved in. He called for interested members of the committee to help shape this and I threw AISA’s hat in the ring. Watch this space for how AISA members can help support the club’s charity efforts.

Then we were on to the questions that had been tabled by the various reps, including AISA. The first of these was about Silver Members. Both Jake Coare (The Silver Members rep) and AISA had asked about the availability of tickets for silvers, something that has been a real concern to our members. The question we asked was:

Given the very welcome return of fans to the Emirates could we ask whether there has been any further discussion of the situation as it affects Silver Members? Since its still looks as if they have little or no chance of getting a ticket this season is it possible that these memberships could be rolled over to 2021/22 gratis or heavily reduced?

Mic Connetta took this one and said he ‘still expected’ that silvers would get the chance to come to games this season. He also reminded us that the club had made a discounted merchandise offer, spoke about the membership packs, and said the club were looking at other ‘virtual’ offers. In all honesty it doesn’t really hit the heart of the issue which is that many members renewed immediately (by DD or simply in response to renewal calls) and feel they have been penalized for being ‘good citizens’. Others have not renewed but have been able to retain their membership.

I reiterated that we at AISA think the best solution is a full or partial discount on next year’s membership. We appreciate the club is facing financial issues by the loss of income but so are many of the supporters that have handed over their cash, almost ‘for nothing’.

Vinai gets this, he promised the keep an open mind on this and to review this again at the end of the season. Jake and I (and AST) all agreed that this was reasonable. Let’s wait and see what happens with the return of fans to the ground. If silvers don’t get the chance to attend then I think we push the club to discount 2021/22’s membership fee. The club has promised to make a statement about the Silver membership situation before the end of December.

There was a brief discussion of Project Big Picture – where Vinai said Arsenal were only loosely involved and that he felt it had all been blown out of proportion in the press. The PL clubs have convened a group to look at the future of the league but nothing is decided yet. The same applies to notions of a European Super league.

We asked about the MyArsenal Rewards (loyalty card) scheme and Mic Connetta (who is leading on this) responded with a brief update. Plans are ongoing and before the end of the January 2021 the sub-committee (which includes AISA reps) will meet to discuss the next move. So again, watch this space for updates. AISA have conducted a survey and will share the finding with that group in the New Year (and directly with Mic beforehand).

There was a really good discussion about head injuries in relation to the awful collision between David Luiz and Raul Jimenez during the Wolves game. Mark Gonnella assured us that in Dr Gary O’Driscoll we have one of the world’s leading experts on head injuries and we can trust his judgment. Luiz was assessed and had no concussion – that is why he played on till halftime. Mark was pushed on this one but he was adamant that the doctor was happy or he would have been taken off straight away.  What caused him to be withdrawn was the cut he sustained, not any concussion.

We then a had discussion about injuries, subs and this season with Vinai clearly a little exasperated that the PL is an outlier in not allowing five substitutes when other leagues have. He hopes it will change – for this season only – and also that head injury subs will also be allowed.

AISA and AST spoke about the PPV campaign and there was agreement from the club that getting rid of the £14.95 was welcome, as was the huge sums of money raised locally and nationally for charity. I highlighted that this was a good example of how fans can help with good causes and, if tied to the club they love, this can really achieve great things. Akhil (AST) pointed out that nationally the FSA campaign and local fans’ efforts – had raised over £400,000 for food banks and other groups.

And I think that was about it for the forum – we did have some assurances about transport and access to the stadium but that is all a little immaterial at the moment since we are excluded once again. Hopefully that will be temporary, and we’ll all be able to watch the team in 2021 and, more importantly perhaps, watch them win!

It really should be said again how valuable these forums are. The chance to talk directly with the club’s CEO and with Edu as technical director (especially the day before a match and after a bruising defeat at the weekend) is massively welcome. I doubt most PL teams are as open with supporters’ groups as the Arsenal. We can all be cynical about boards and CEOs and comms teams but it is to Vinai and Mark and Edu’s credit that they take the time out to talk to us, and so to you through us, and to listen to what fans are telling them.

This is why fans groups like AISA matter and why, if you aren’t  a member, you might consider joining us. Who knows, it could be you sitting round a table (virtual or physical) with Edu and Vinai next year.