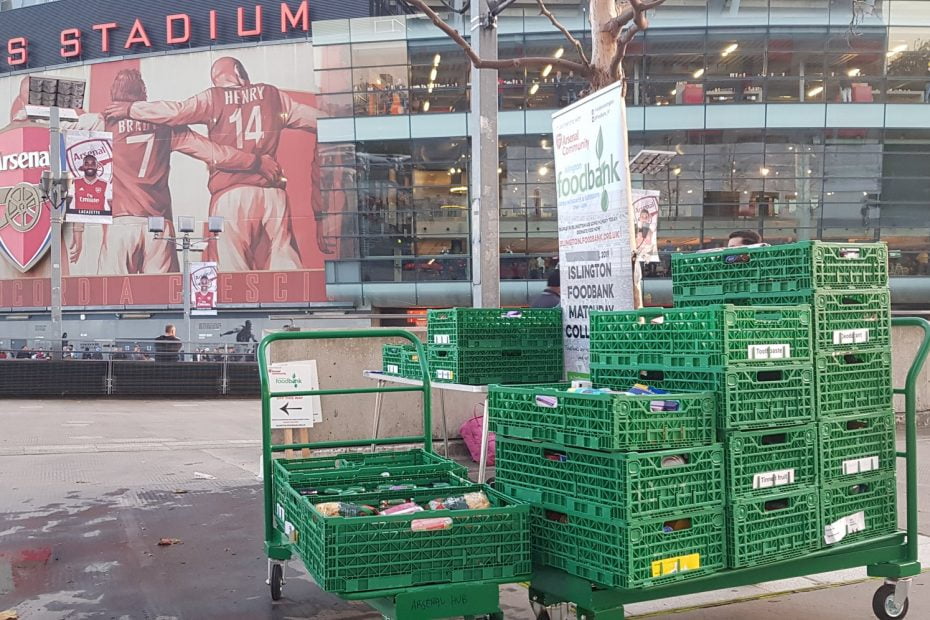 When the weather was perfect on Sunday, 27 October, Islington Foodbank volunteers knew it was going to be a great day.

For the second time this season, Arsenal supporters had been asked to contribute to a food drive before a Premier League match at the Emirates.

The first drive, on Easter Sunday, raised 380kg of food and toiletries. Question was, could those coming to the Crystal Palace match beat that total?

They did! This time they donated 528kg – an increase of nearly 40%. That’s enough food to feed one person for over 330 days.

“There were some familiar faces and we collected 38 crates of food and toiletries,”commented Emily Cowan, one of the twelve Islington Foodbank volunteers on the day.

“It was great to see the camaraderie of the Arsenal supporters giving what they can to the Islington Foodbank,” said Amin Alkhatib, another Foodbank volunteer.

Over 4,200 people have been served by Islington Foodbank since January. As all the food it distributes comes from donations, events like the Arsenal collection are an important source, as are drives and collecting bins in local supermarkets. Generous support also comes from local residents, businesses, schools, churches and other groups. In 2018, 48716 Kg of food was distributed to 6000 people, of whom 1382 were children.

Islington Foodbank was established in 2011 and is a member of the Trussell Trust network of 428 foodbanks in the UK. It provides three days’ worth of emergency food to people who find themselves in a crisis. Each week volunteers meet clients to give them their food, manage stock in the warehouse, prepare bags for clients, and organise food drives. It operates from Highbury Roundhouse on Ronald’s Road (N5 1XB) and is open on Mondays and Saturdays from 1pm – 4pm.

So well done and thanks to all the supporters and volunteers who took part in the recent collection. Arsenal FC is planning further collections next year.