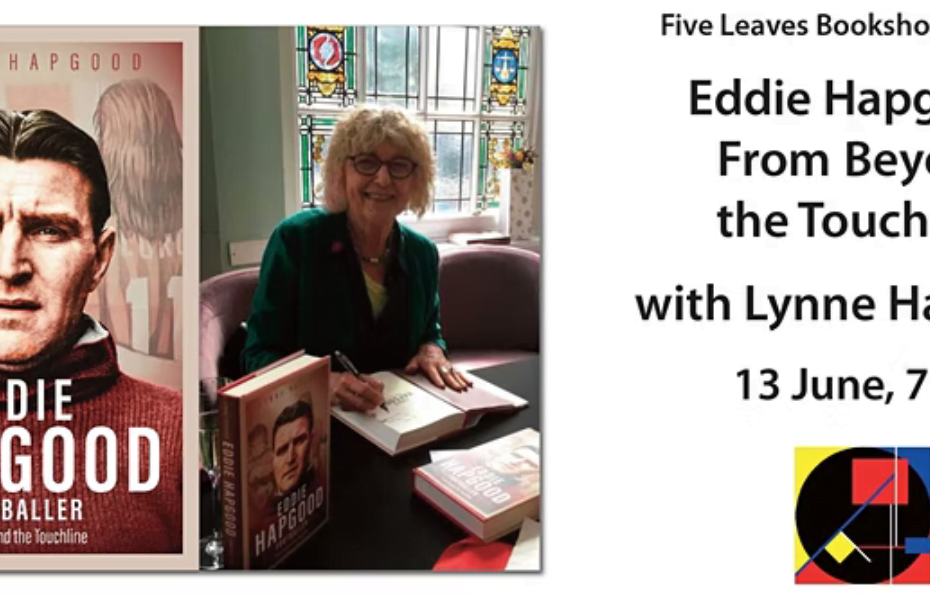 Eddie Hapgood’s daughter Lynne Hapgood is promoting her book “Eddie Hapgood: From Beyond the Touchline” at Five Leaves Bookshop, Nottingham in person on Monday 13th June at 19:00 to 20:30.

Lynne is being interviewed by Andy Exley (Historian and Arsenal Publications Manager) about her father and issues raised in her book.

Tickets for the live or Zoom event must be pre-booked and are £3.

Eddie Hapgood was a young unknown from Bristol who became Arsenal and England captain and a national hero, in the dark days of the 1930s. His impact is so enduring that when the millennium dawned, the public voted him one of the greatest sportsmen of the century. That glorious legacy was painfully achieved. Hapgood considered football an art and played it joyously as part of a team, but he struggled when politics, class and money threatened to undermine him and corrupt football.

By the late 1930s, the ugly shadows of fascism, Nazism and looming war were bearing down on the beautiful game. Hapgood found himself in a public fight for justice and respect, while behind the scenes he protected his family with dedication, love and humour.

In her memoir, his daughter Lynne Hapgood pulls together the various threads – success, celebrity, tragedy and vindication – to reveal the real Eddie Hapgood. She examines the nature of sporting greatness and its impact on fans and family.

At this event Lynne will be in conversation with Andy Exley (Historian and Arsenal Publications Manager) about her father and the issues raised in the book.

(AISA thanks AISA member Nigel Jennings for the heads up!)