Bob Wilson and me 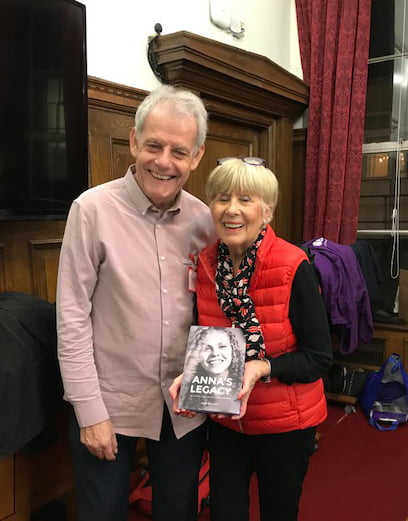 Bob and I go way back. I played in goal at the same time he was Arsenal’s Double-winning ‘keeper. My style was much the same as his. In fact, I modelled my technique – of diving at the feet and pinching the ball off onrushing forwards – from him. He might have recognised it had he ever travelled to a muddy field somewhere outside of Canterbury and stood on the touchline to watch the East Kent Combination, Division 3 Reserves.

The way I snuffed out marauding wingers was reminiscent of his famous denial of George Best, even if my opponents were 48 year-old teachers or 17 year-old theology students.

Later on, when my mother was diagnosed with multiple sclerosis, he answered my letter asking for suggestions of where she could receive hydrotherapy. Quite how he knew, let alone troubled to hand-write an answer to me, has impressed me to this day.

All this was long before Bob and his wife Megs suffered the unimaginable tragedy of losing their daughter, Anna, who died from cancer in 1999. What they learnt from the tragedy was the value of quality of time and quality of life during serious and life-threatening illness.

They set up the Willow Foundation to provide that for others, providing similar positive, motivating and uplifting experiences for seriously ill young adults and restoring some normality back into all their lives. When I discovered it, the Wilsons again became a part of my life, and I’ve contributed in some small part to the 16,500 Special Days Willow has fulfilled for young adults living with life-threatening conditions.

I met Bob for real last week (at the AISA 100 for 100 event at Islington Town Hall). It was if we’d been best mates since before he joined Arsenal in 1963. A warm handshake, big smile and welcoming greeting – and despite his being at the end of a gruelling day and fighting off a cold that had almost deprived him and Megs of the ability to speak. Yet he didn’t relax, spending the evening chatting to supporters, signing autographs and being one of the last to leave at the end of the event.

Bob and Megs are a wonderful couple who have lived through tragedy to help bring light into the lives of other people. I’m proud AISA raised around £5,000 from the night and would urge others – Arsenal supporters or not – to donate to Willow so they can continue their work.