Arteta is focused on waking the sleeping Arsenal bear! AISA report on the May Arsenal Supporters’ Forum 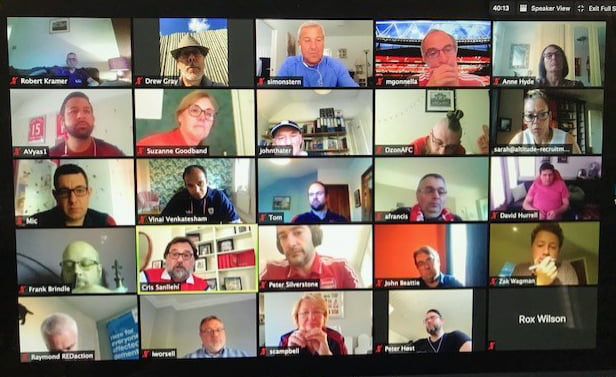 At 6 tonight your intrepid AISA representative logged into Zoom to attend the latest Arsenal Supporters Forum. Usually these events take place at the Emirates Stadium or in Highbury House but these are far from usual times, so this was a remote meeting.

As is customary Mark Gonnella chaired the meeting and both Vinai Venkatesham and Raul Sanllehí were in attendance, along with several other representatives from the club. Vinai gave an update on the situation since March (when we last played a match) and how the club had coped, and Real made his own presentation on how the team and Mikel Arttea were dealing with things.  We then had a series of questions – most of which had been posted in advance – which the Arsenal staff did their very best to answer.

Arsenal were affected by CV-19 quite early, with our manager being one of the first (if not the first) high profile person to test positive to the virus. Within 45 minutes, the club had closed all its sites and communicated with the league, the clubs we had played and were due to play, and all its staff. This was unexpected but not unplanned for – Vinai explained they had clearly prepared for just such an event.

But however prepared you are, that doesn’t ring-fence you from the repercussions of closing down all your commercial revenue streams overnight. Arsenal are ‘effectively a break-even operation’ and we have just lost all match day income. Moreover, this affects sponsorship (future deals at least), impacts the TV contracts, everything. So there are lots of risks  but he sounded like someone who was very far from panicking.

All of the 500 permanent staff are being kept in the picture with regular video meetings and communications; all 1500 of Arsenal’s casual workers have been and will be paid to the end of May, despite not being able to do any work since March.

Moreover, Arsenal are doing ‘their bit’ in the community. The highlights of this are:

But, as Vinai pointed out, this is really just ‘business as usual’: Arsenal has been doing this sort of thing for the last 30 years but we should feel rightly proud of the way the club is reacting to the crisis.

While the players are now just returning to training, Vinai was at pains to says that this is a step-by-step process. No risks will be taken with them or any of our staff. And, in answer to an AISA question, no money or resources has been, or will ever be taken away from the NHS. Nor will emergency services be impacted by Arsenal if and when football resumes. No PPE or tests will be taken away from the NHS or vital front line industries to service Arsenal or football.

In response to questions of whether the season should be cancelled or continued, Vinai was pretty clear. He would rather it was settled on the pitch (behind closed doors) than in a boardroom by ‘people like me’. The season might be compromised by teams with players able to play now when in March half their squad was injured (i.e Sp*rs), or by playing at neutral venues, but it was compromised the moment games were called off. What is the alternative?

Raul spoke with passion (as he always does) about the squad – all of whom have agreed to take a real pay cut (not to defer part of their salaries like some clubs have) – and about Arteta. He emphasized the three core values of the club:

The club has really come together in the pandemic and the team is being very well led by the manager. He is holding video meetings with individuals and groups of players and the club is allowing closely monitored use of London Colney for limited training sessions. Raul points out that it is much better for individual players to use Colney – arriving in their own vehicles, going home to shower – not even using the loos! – than training as the government allow in a public park (where they would get asked for selfies).

This is he says probably the biggest crisis in the club’s history but Mikel Arteta is determined that we come out of it as the best-prepared club in the league. He said Arsenal is like a bear in winter, making sure it has enough food to survive until the ground thaws and we can come out to hunt.

On contracts – in response to a question – the next window is simply not on the agenda right now, but FIFA have agreed a three-month extension to all contracts that are expiring (including loans). Players will not be able to play for a new club within that period so there is no advantage to them walking at the end of June just because their contract is up.  That gives clubs some stability as they seek to finish the season (however that happens).

On other questions that AISA asked: Vina and Ivan Worsell said that season ticket holders will get credits (as is normal) for games that don’t take place. Ticket holders will be refunded and the club are working at how quickly they can do this, and looking at software solutions to speed it up. Simply put, this is a massive exercise so will take some handling, but no one will lose out. They are still working out what happens for next season but there will be no increase on ST prices despite the loss if income the club has sustained.  They are undertaking a full review of the ticket situation in the light of the pandemic’s impact and that includes looking at the ongoing access problems faced by vulnerable and disabled supporters.

You have to be impressed at the  way Arsenal FC are handling this crisis and at how they genuinely seem to be forging a new sense of togetherness, from the players and manager, through the executive and support teams, right down to the one remaining cleaner on John Beattie’s staff. We pointed out the state of the stadium to John and he acknowledged that perhaps it was worse than is usual for the close season. But he normally has a team of 17 cleaners and his own chap can’t do everything! I think we need to cut them some slack here, especially as budgets have been slashed as the club focuses on bigger issues.

So, it was a good meeting, with a very positive vibe from all those attending.  Football matters but, as Vinai and Raul were quick to point out,  not as much as people’s lives.