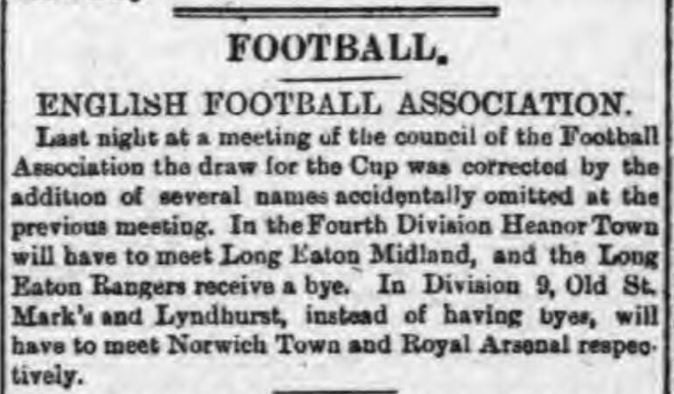 Whilst writing the special cup final edition of the Arsenal History ProgrammeI came across a story of confusion at FA headquarters that meant the club were initially excluded from the competition before they had even played a match.

Royal Arsenal’s third season, in 1888-89, had been one of much progress, particularly towards the end of the campaign, when six of the last eight matches had been won. In addition there were a number of notable victories in the two cup competitions which the club had entered.

So the following season Arsenal entered the FA Cup for the first time and were no doubt eager to discover who their first opponents would be. The FA Council meeting to decide the arrangements and draw for the early stages of the competition was to take place at Anderton’s Hotel in Fleet Street on Monday 22 July.

However, prior to the Council meeting a Special General Meeting had been called to discuss the resignation of the President of the FA, Major Francis Marindin. After much discussion that meeting resolved, nem con, to ask the Major to “reconsider his decision, or at least to defer his resignation until after the present season”.

The Council meeting immediately following then agreed that 18 clubs be given byes to the FA Cup competition proper whilst all others would be required to enter the qualifying stages. These clubs were grouped into ten geographical divisions before the draw took place, seven covered the North and the Midlands, one consisted of clubs entirely from Belfast, the final two were for teams in London, the south and the east.

The draw was made for the first qualifying round and the Lyndhurst club from the Denmark Hill area (now very much part of London, but then in Surrey) were one of those who received a bye into the second qualifying round. There was just one problem, or rather four, namely four clubs had been accidentally omitted from the draw, including Royal Arsenal.

It was a further five weeks before the situated was corrected, at the FA Council meeting held on 28 August. For Royal Arsenal the result was a home tie with Lyndhurst, who had been winners and defeated finalists in the Surrey Senior Cup in the two previous seasons.

The match, which took place at the Manor Ground on 5 October 1889, was expected it to be a tightly fought game and Lyndhurst attacked from the outset. However, the first goal of the game came when Horsington centred for Robertson to score for Arsenal; soon afterwards Barbour added a second. The game was quite even for a while but before half time Robertson had scored his second to make it 3-0.

The second-half was completely one-sided. Scott scored goals four, five and six for Arsenal; five more followed from Meggs, Barbour, Horsington, Robertson and Meggs again – so the five forwards shared all of the goals between them in an extraordinary 11-0 victory.

In the second round Arsenal were drawn away to Thorpe, a team from Norwich, the result being a 2-2 draw, after extra time. Thorpe then withdrew from the competition, as they were unable to afford the travel costs to London – something that was not unusual in the FA Cup during its’ early years. Crusaders were beaten in the next round, Arsenal winning 5-2 after extra time.

The run came to an end in the fourth qualifying round on 7 December, when Arsenal were beaten 5-1 at home by the Swifts team, who were based in Slough. This club, who merged with another to become Slough FC the following year, had reached the semi-final stage of the FA Cup three times previously.

A small, and completely inaccurate, addendum to Arsenal’s first match in the FA Cup was inadvertently provided by the BBC just before the 2002 FA Cup final. A BBC reporter from the Hampshire area discovered that Lyndhurst were Arsenal’s first FA Cup opponents, assumed that the club concerned was the Lyndhurst FC from that part of the country, and published a story accordingly.

However various press reports from 1889, uncovered by Andy Kelly, make it clear that the team who played at the Manor Ground on 5 October 1889 were from Denmark Hill, not Hampshire, and furthermore the team line ups for previous matches played by that club include players who also appeared against Arsenal. There is therefore no doubt that Arsenal’s first FA Cup match was against a club from what is now south east London and not from the south east of England!

This is a shortened version of the article that appears in the special cup final edition of the Arsenal History Programme. An electronic copy of the programme is sent to all paid-up AISA members. Hard copies can be purchased for £3.50 (including p+p) by contacting [email protected]