AISA celebrates 100 years of Arsenal in the top division 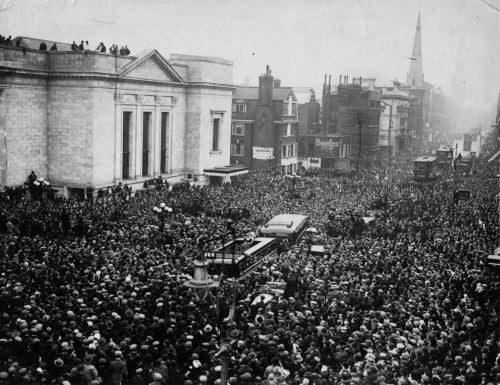 [This is the first of a number of reports from AISA’s 100 Years of Arsenal in the Top Flight event, MC’d by Tom Watt at Islington Town Hall on Friday 22 November 2019.]

We live in a world in which some produce fantasy tales of events from the past, while others deny that something we all thought happened, actually did happen.

So it is, even with something seemingly as straightforward as Arsenal having spent 100 years in the top division of English football – which AISA members celebrated at Islington Town Hall last Friday – there are those who deny the validity of the celebration.

For out there in the world of cuckoos there are even now some who suggest that there was bribery and corruption at the start of Arsenal’s 100 years in the top league which we celebrate this season.

And it was because of this work that we felt ourselves to be on very firm ground in holding a celebration of 100 years in the Top Division at Islington Town Hall, in the company of two distinguished players from the past (Alan Smith and Bob Wilson), two current top level representatives of the club (Vinai Venkatesham, MD and Mark Gonnella, Communications Director) and many Arsenal supporters. We were welcomed by the Mayor of Islington, Rakhia Ismail, who spoke about her personal links to Arsenal’s work in the community [and we’ll say more about this in a subsequent article].

Bob Wilson and Alan Smith revealed some previously hidden details of their time in the club (Bob’s revelation of what Don Howe said to Frank McLintock before a game against Man United was particularly enjoyable), and we were all brought down to earth by an update on Arsenal’s involvement with Syrian refugees in Jordan in the present day.  Such details helped us all understand the range of the Arsenal Foundation and its activities and appreciate the full reach of Arsenal FC across the world.

We were also all delighted to hear about Arsenal’s work in arranging the renovation of the grave of Lt Colonel Sir Henry Norris in East Sheen near Richmond.

Now if you have been following the work of the AISA Arsenal History Society you’ll also know that we’ve been working for a number of years to ensure that fans of Arsenal are not taken in by the anti-Norris propaganda that has been in circulation ever since Leslie Knighton (the manager Sir Henry fired to make way for Herbert Chapman) published his memoirs after the second world war. These stories contain, without foundation, the most appalling allegations against Sir Henry, and have blackened the man’s name ever since.

Yet Sir Henry (right) was the man who rescued Arsenal from bankruptcy in 1910, built Highbury – guaranteeing the cost personally – and brought in Herbert Chapman as Arsenal’s manager.  Indeed it is not the slightest exaggeration to say that without Sir Henry Norris there would have been no Arsenal FC today – and we’re delighted that after the publication on our website of our huge history of the work of Sir Henry in relation to Arsenal on our website, the club has made this move.

Of course numerous bizarre tales still circulate about the time when Sir Henry was chairman of the club, such as the weird story of the manager Knighton giving drugs to the team in order to help them beat West Ham in a cup tie – a story mentioned in the booklet given to those who attended the 100 years celebration.

And this is a most interesting point since it highlights one of the key issues for historians of football, who will often deal with some known facts (such as the date and result of a football match) but very limited data concerning events surrounding that match.

In this particular case, the only source for the bizarre allegation that Arsenal players were drugged by their own manager is the autobiography of the said manager, Leslie Knighton.  And the question then arises, if there is only one source, how can we ever tell if the tale is true?   Especially in a case like this where extracts from the book were published in a sunday newspaper – which means the temptation to exaggerate or even invent stories at the behest of the publishers is something we must bear in mind.

It is here that the historian can show his or her dedication to the task, not just by looking for collaborative evidence (in this case there turns out to be none, for none of the players ever mentioned the incident and it was not reported contemporaneously) but also considering the story and then looking at any information we do have relating to surrounding events, to see if this might support or contradict the tale.

In this case, Knighton places much emphasis in his autobiography on the power, strength and reputation of West Ham at the time – hence the need to give the Arsenal team artificial stimulants.  He also mentions that he gave the players the drugs twice, but the game was postponed each time, and so the effect of the drugs in terms of playing performance was not tested.

In fact, the records show that West Ham were nothing more than an average league team at the time, with none of the fearsome reputation that Knighton reported. We can also note that Knighton wrote his account around 20 years after the events he alludes to, and it is clear from the hundreds of factual errors in his autobiography in relation to issues that can be checked, that he had no access to any written records of the club from the era of his management.

As for the postponed matches, Knighton seems to suggest that the games were called off at the last minute (hence the taking of the drugs without the game taking place) – but in fact the games were postponed because of a dense fog that enveloped London for days on end, and there was never any realistic chance of playing the game.  Hence there was actually no reason why he might have drugged his own players on those occasions – he must have known the games would NOT be played!

Of course this chain of logic is not absolute proof, but rather it helps us look at the balance of probability – something that is at the heart of the work of the historian when dealing with individual reports from the past.  We know the results of games, but the whys and wherefores often call upon us to look for background information and then ask, “is this likely?”

This indeed is what we have done with the whole period of Sir Henry Norris’ stewardship of Arsenal from 1910 to 1927.  Sir Henry left no diary, and no contemporaneous biography exists of the man, despite his central role in the rescue and rebirth of Arsenal.

Thus we have written up the story of Henry Norris at the Arsenal, and made our own contribution to recording Arsenal’s history.   Now we plan to continue our work investigating and exploring other areas of Arsenal’s history, exploding the myths and drawing what we hope are reasonable and logical conclusions from such evidence as is available.

There is an index to the many areas of Arsenal’s history that we have already explored, on the home page of our website.   I do hope you will be able to find time to take in some of our work, in the near future.   And of course if you’d like to join in our exploration, or you have information that you think could be of significance, please do get in touch.