100 for a 100 years! AISA and the Willow Foundation – raising money and making special memories 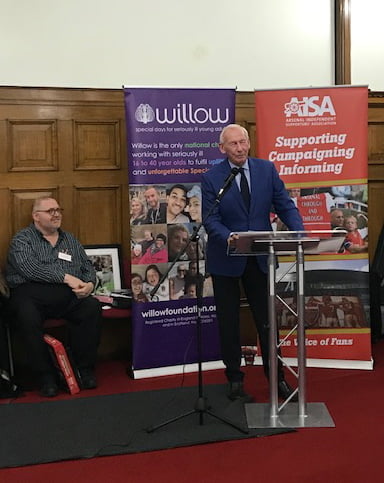 Bob addresses the 100 Years event while Paul Matz looks on

AISA’s 100 of Arsenal in the Top Flight event at Islington Town Hall was the brainchild of Paul Matz, ISA’s founder and membership secretary. From the start Paul was determined that alongside celebrating what was (and is) a unique achievement in football history – 100 years unbroken years of playing in the top division of English football  – he wanted this to be an opportunity to raise funds for a charity that is very close to Arsenal hearts, and we had 100 Arsenal fans along to mark it: so 100 for 100!

2019 marks 20 years since Bob and Megs Wilson set up the Willow Foundation charity as a tribute to their daughter Anna who died of cancer at the age of just 31.

The charity exists ‘to provide special days to individuals and their loved ones to give them a break from the realities of their diagnosis and treatment and the inspiration to make the most out of life. At a time of uncertainty, spending quality time with family and friends can help restore a sense of normality, boost confidence and create precious memories for the future’.

At the event in Islington Town hall Bob and Meg (both suffering with heavy colds) spoke about the work of the charity and how it has now provided over 17,000 Special Days to people of all ages suffering with conditions such as ‘cancer, motor neurone disease, cystic fibrosis, muscular dystrophy and Huntington’s disease’.

In a reception just before the main speakers’ event Bob talked to loads of supporters about the charity, and about his memories of playing for Arsenal in the 1970s and coaching keepers such as David Seaman in the years after he retried. Meg and Bob also brought along copies of Meg’s new book – Anna’s Legacy – published to celebrate the 20 years of the charity. They only had two dozen copies and they sold out in no time!

Everyone attending on the night was invited to make a donation in support of Willow and to do so in advance. This meant that AISA was able to present Bob and Megs with a cheque for £2,825 but this wasn’t the end of the fund raising.  To that we could add £360 for the sales of Meg’s book (and if you want a copy just visit the Willow Foundation website here) and then we had a charity auction.

There were four lots: A current Arsenal shirt signed by all the first team players and kindly donated by the club. That went for around £800. A signed framed photography of Thierry Henry fetch over £350 as did a fantastic boxed book of Arsenal stats and facts before Bob Wilson provided the final lot, a signed goalkeeping glove and a shirt from a ‘Legends’ match also topped £550.

All in all, the auction – marvelously hosted by the night’s MC Tom Watt – raised around another £2,000+ for Willow. If you weren’t there but you want to send Bob and Megs some money to help them give wonderful and much needed days out for more people and want to find out more about this fantastic charity you can follow this link to their website and make a real difference to someone’s life.