What we found was a wide range of historical “facts” about the club that were not facts at all, and these errors which have littered previous histories of the club have now been put to rights.

Now, as our research team are turning their attention to Arsenal’s journey to Highbury and into the first division, they are starting to ask another interesting question: should we reconsider our views on the man who oversaw those developments – Sir Henry Norris?

The first publication from Arsenal History Society that Andy Kelly and myself wrote outlined no less than 18 significant historical “facts” about the club that were not facts at all. All AISA members have been sent a copy of “Dial Square to Woolwich Arsenal”.

Now, as we turn our attentions to the next phase of Arsenal’s history (the move to Highbury and the election to a place in the first division) I find Tony Attwood pondering the role of one man in particular: Sir Henry Norris.

Norris took over Woolwich Arsenal when no one else wanted the club in 1910, and through his action in financing the pay off of the clubs significant debts that year he enabled the club to continue playing. 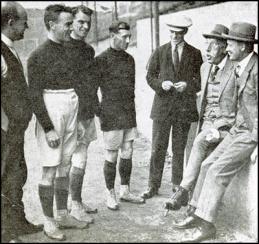 Subsequently he paid for the building of the Highbury stadium out of his own pocket, led the campaign to get Arsenal elected into the first division, brought in Herbert Chapman, and effectively set up the modern club that we support today.

And yet despite that he has always had a bad press. Part of this is undoubtedly of his own making – he was expelled from football after making an illegal payment to himself from the club’s funds. And yes, the evidence suggests he was completely in the wrong over this. But any view of the broader picture shows how insignificant this was – a matter of small change compared to the tens of thousands of pounds (millions of pounds in today’s money) that he put into the club when he built Highbury.

However from the club’s point of view Norris does not exist. There is no statue to him, no picture of him in the boardroom, no recognition of him anywhere, no celebration as part of the 125 year anniversary. Norris has been written out of our history.

Such a perspective has been a huge triumph for Tottenham Hotspur who went to enormous lengths to try and stop Norris bringing Arsenal to north London, calling meeting after meeting of the Football League, organising petitions and encouraging Islington Council to oppose the move.

What’s more when Arsenal were elected to the first division on its expansion in 1919 Tottenham led the accusations that somehow Norris had fixed the election.
But no evidence has ever been put forward to suggest that either Norris or Arsenal broke a single football regulation either in the move to Highbury or in the election to the first division.