It’s in every book of Arsenal history; the debt the club owes to Herbert Chapman.  Not just in bringing in the first trophies but also in reforming the very heart and soul of the club.

According to the stories, Chapman did everything, from changing the shirt colours to persuading London Transport to developing a new playing formation. From getting the name of the underground station changed to even changing the very name of the club itself.

Except…  maybe he didn’t quite do all of those things.

Of course no one wants to reduce the high esteem in which Chapman is held but on the other hand there is no harm, just once in a while, in going back and checking the facts. 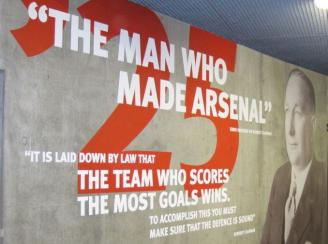 And that’s one of the things that the AISA Arsenal History Project does. We go back and rummage around in the past, finding the missing bits and just making sure that everything happened as we are told in the history books.

Mostly of course the reports of the past are absolutely sound; everything happened as we believed it did. But just occasionally something crops up – something which wasn’t quite as we have been led to believe…

Over the last year the AISA Arsenal History Project has unearthed several such issues, including one that relates to Herbert Chapman’s reforms. It doesn’t in any way diminish what Chapman did and doesn’t change our view of just how great a reformer he was but it does show how a story which isn’t quite right, once told, can be repeated and repeated, until it is taken as the truth.

You can read about our latest discovery at http://bit.ly/93i3UL

There’s an index to the whole AISA Arsenal History web site at www.blog.woolwicharsenal.co.uk . We not only report historic investigations but also the experiences of fans coming to Arsenal matches. It’s open to everyone.

The project is overseen on behalf of AISA by Tony Attwood. You can contact Tony at [email protected]